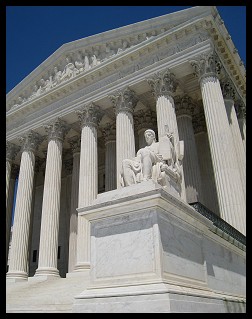 "The order isn't a permanent reversal," notes election law expert Justin Levitt, "it's a stay awaiting the disposition of a petition for certiorari, if one is filed. But it's enough to put the state's law back in effect this November."

"The nation's worst voter suppression law since the Jim Crow era," as we described the law when state Republicans enacted it within hours after SCOTUS had gutted a key portion of the Voting Rights Act, will now be in full effect for this year's November general election, despite having been shown to have disenfranchised hundreds of voters during the state's primary earlier this year. There was no debate or time allowed for public comment before the law --- which shortens early voting hours, ends same-day registration, implements disenfranchising polling place Photo ID restrictions (in 2016) and much more --- was passed by the GOP-majority in the NC legislature last year.

Barring a further hearing by the Court, their response to NC's emergency appeal reverses the 4th Circuit Court of Appeals' ruling that had restored both same-day registration and the counting of provisional ballots cast in the wrong precinct. All of the law's other provisions had already been approved for use this year by a George W. Bush-appointed U.S. District Court judge last month, pending a full trial on the merits of the law scheduled for next summer....

"At the end of the day," the 4th Circuit wrote when overturning the U.S. District Court judge's decision, "we cannot escape the district court's repeated findings that plaintiffs presented undisputed evidence showing that same-day registration and out-of-precinct voting were enacted to increase voter participation, that African-American voters disproportionately used those electoral mechanisms and that House Bill 589 restricted those mechanisms and thus disproportionately impacts African-American voters."

In her Supreme Court dissent late today, Justice Ginsberg cited that decision, writing: "The Court of Appeals determined that at least two of the measures --- elimination of same-day registration and termination of out-of-precinct voting --- risked significantly reducing opportunities for black voters to exercise the franchise in violation of Section 2 of the Voting Rights Act. I would not displace that record-based reasoned judgment."

In their response [PDF] to NC's emergency appeal to the Supreme Court, the League of Women Voters, one of the plaintiffs in the ongoing lawsuit, had cited the Republican move to enact the law on "the very day this Court issued its" decision in the Voting Rights Act case last Summer, and how the law had radically altered "a wide range of areas, including registration, ballot counting procedures, and early voting, as well as rules on poll observers, and voter identification requirements."

"In so doing," the League wrote, "the State surgically eliminated the precise forms of registration and voting that had enabled significant expansion of African-Americans civic participation in North Carolina over the previous decade."

The League and its co-plaintiffs are not the only ones who disputed the state Republicans' claim that a limited injunction to prevent the state from eliminating two procedures that have been in place for years --- same day registration and the counting of out-of-precinct ballots --- entailed a "massive and unprecedented last-minute change" to voting laws, which SCOTUS has, at least until this year, long cautioned against. Following the 4th Circuit decision, "North Carolina county election directors have en masse reported that they can implement these two practices without harm to the voters," the League had written in their Response.

But that argument appears to have fallen on mostly deaf ears at the High Court, despite evidence that hundreds of voters in the Tar Heel State were disenfranchised by the new voting restrictions during the state's primary election earlier this year.

Where, during the November 2010 election, "over 21,000 voters were able to vote because of the availability of" same day registration, the League explained, its absence led to disenfranchisement of many voters during the state's May primary.

An especially shameful case involved the disenfranchisement of Craig Thomas, an active member of the U.S. armed forces who returned home "from an 18-month deployment in Afghanistan and sought to vote, only to be told at his early voting site that there was 'no record of [his] registration'...He had not been notified that his registration was cancelled while he was deployed" --- a deficiency that he was unable to remedy due to the absence of same-day registration this year.

Thomas was just "one of 454 North Carolina voters who would have had their ballots counted in 2012 but did not have them counted in the 2014 primary because of North Carolina's elimination of same-day registration and prohibition on counting a provisional ballot cast in the wrong precinct," according to a report by Democracy NC that was cited by The Nation's Ari Berman last month.

In addition to Thomas' lost vote, that report also cited hundreds of others who where "denied a chance to have their votes heard" during the primary election with the new voting restrictions in place. Among those who also lost their right to vote, as cited by Democracy NC:

a first-time voter who registered at the DMV, but that registration didn't reach the local board of elections; a precinct judge assigned to a precinct other than her own who couldn't leave to vote in her home precinct; a disabled senior who was driven to a friend's polling place on Election Day; a nurse who temporarily registered her car in a nearby county while working at its hospital for nine months; a college student who registered during a voter drive but her application was not recorded; and a new couple in town who mailed in their registration but it did not reach the county board of elections before the registration deadline.

With the Court's elimination of same-day registration in the November election, and clearance to toss all provisional ballots cast at a precincts where a voter was not assigned to vote, the odds may have just increased for a Republican take-over of the U.S. Senate, as incumbent Democratic Sen. Kay Hagan is currently in a very tough race for re-election in NC.

A new report just released by the non-partisan U.S. Government Accountability Office found that voting restrictions akin to those now allowed in NC, have served to depress voter turnout among young voters, African-Americans and others inclined to vote in favor of Democrats in states where such measures have been implemented.

Last week, in a decision with a similar result, the Supreme Court voted 5 to 4 to overturn the 6th Circuit Court of Appeal in Ohio. That court had affirmed a lower court's order to restore early voting hours and days which state Republicans had tried to scuttle. Even though both the U.S. District Court judge and Appellate jurists agreed that the law violated voting rights in the state, the SCOTUS decision cut them off at the knees by allowing state Republicans to rollback successful voting reforms implemented after the Buckeye State's disastrous 2004 election.

There will be still more decisions forthcoming from this Court that are likely to have a direct impact on the results of the November 4th election. One of the most anticipated is a decision that may allow Photo ID voting restrictions in Wisconsin, where Republican Gov. Scott Walker also faces a "toss up" re-election contest, despite a U.S. District Court judge's injunction, after a full trial, finding that the law could serve to disenfranchise as many as 300,000 legally registered Badger State voters. That injunction was overturned by a deadlocked, 5 to 5 ruling by the 7th Circuit late last month, and bolstered by a rightwing judge who offered a written ruling this week offering all manner of demonstrably blatant falsehoods for consideration by the Supremes. A ruling in that case is expected any day now.

A similarly restrictive Photo ID voting law is currently being challenged in the state of Texas and may also make its way to the Supreme Court prior to this year's general election.

- Ernest A. Canning also contributed to this report

* * *
Please help support The BRAD BLOG's fiercely independent, award-winning coverage of your electoral system --- now in our ELEVENTH YEAR! --- as available from no other media outlet in the nation...
Tweet