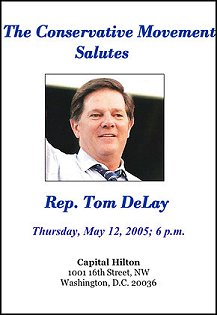 And then there's this from the WaPo piece today which suggests this "salute" is actually a "wave goodbye" (do ya think?):

"We appreciate his strong leadership and we think he is the key to the president's agenda," says the Free Congress Foundation's Paul Weyrich, one of the host committee members for the DeLay dinner.

And as a final, "oddly enough", looks like that Paul Weyrich fella is a busy busy boy of late working overtime on damage control in support of friend, DeLay. He was quoted defending the soon-to-be outgoing House Majority Leader in WaPo's lollapalooza from yesterday covering the latest bit of foul play in which DeLay's great $upporter Jack Abramoff is found embroiled again, right next to Mr. DeLay! This time, even including a gangland style murder! And in South Florida, of all places! Oddly enough. Go figure!:

DeLay told a group of conservatives last month "that he had no idea that Abramoff was involved in this and was absolutely shocked when he found out about it," said Paul M. Weyrich, a conservative activist and longtime friend of DeLay's. "Immediately he had Abramoff called in and told him, 'I want no more dealings with you,' and I think he felt blind-sided by Abramoff, that Abramoff was aware of Tom's views on the subject and never bothered to tell him" about his stake in SunCruz.

Sorry for the OT
Just wanting to draw everyones attention to this important post.

Winter Patriot, thanks for the link to the WaPo Susan Schmidt story. I've been following the Abramoff, Scanlon, Delay story since Sept. 2004. They are DIRTY, DIRTY, Dirtier than Dirt. They are mobsters & monsters. Interesting how bad Delay's memory is sometimes.

This is such a convoluted tale - the octopus. I'd like to share a link to a collection of articles by Susan Schmidt, 7 of which are about this network of goons:

I suppose it was the enchanting photo of the lovely & talented Mr. Delay that kept me from noticing Brad's signature.

Memo to Weyrich: If Tom DeLay was "shocked" to learn of the activities and motives of a powerful lobbyist who had been wining and dining him for months, then Lt. Renaud was genuinely "shocked, shocked..." to learn that gambling was going on in Rick's Cafe.

Who pays for these expensive dinners, anyway? Why are they considered news? A Republican sleazebag is honored by right-wing ideologues while trotting the globe as the guest of crooks, and this is considered a legitimate political event?

Adios La Cucaracha! Don't let the door hit ya in the ass.

Kira - I go away for a few days, and I don't even exist anymore!