Help keep The BRAD BLOG independent!
All of our work, including The BRAD BLOG, The BradCast and Green News
Report, is only possible thanks to contributions from readers and listeners!
Latest Featured Reports | Tuesday, October 4, 2022

Sunday 'Think About It' Toons
There's plenty to ponder in PDiddie's latest collection of the week's best political toons...

Sunday 'Heavy Traffic' Toons
Be sure to check PDiddie's latest collection of the week's best toons before crossing state borders. You're welcome!... 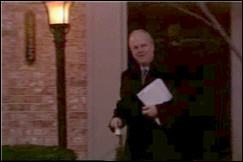 If reporters and cameras greet you as you leave for work in the morning then you are probably in the media's spotlight. Karl Rove found himself in that familiar situation this morning and it's making some Republicans a little nervous.

If reports are correct then Viveca Novak's testimony did little or nothing to bolster Rove's case. It also doesn't explain why Rove took 5 months after being "reminded" of his conversation with Cooper to notify the grand jury. An article posted at The Raw Story says that Special Prosecutor Patrick Fitzgerald is presenting additional evidence to the grand jury today.

The other unrelated "Novak" popped out of his hole long enough to stir up some more controversy in the CIA Leak investigation. As reported by The News & Observer, Robert Novak, who was first to disclose the identity of CIA operative Valerie Plame in the press, said the president knows the identity of the individual in the White House who leaked Plame's identity.


"I'm confident the president knows who the source is," Novak told a luncheon audience at the John Locke Foundation in Raleigh on Tuesday. "I'd be amazed if he doesn't."

"So I say, 'Don't bug me. Don't bug Bob Woodward. Bug the president as to whether he should reveal who the source is.' "

UPDATE from The Raw Story: Special Prosecutor Fitzgerald did not meet with the grand jury today as expected. Sources (vague as they are) report that Fitzgerald did "move forward" with the case.

Ok Novak you presstitute, we are hereby asking the president:

Mr. President, who outed a lady who specialized in fighting WMD dangers against the United States?

Nothing sticks it to the terrorists like revealing
the identity of an active CIA agent.
(We’re gonna smoke ‘em out)

With absolutely no shame, you stand tall in your
destruction of science in Kansas, even
if you haven’t graduated college.
(Preacher man say Earth only 6000 year old)

Your distinguished leader bankrupted three companies,
was a drunk until he was forty, and is, by some
standardized test results, technically retarded.
(Define Tribal Sovereignty…)

When the reason for this war turned out to be false, you
just made up another, and then another, showcasing to
the world your true talent for creativity.
(I get darn good intelligence,… I mean, ... they hate freedom)

So crack open a nice cold Bud Light Mr. Conservative
Chickenhawk…because you were not only absent in our military,
you’re a disgrace to it.

I think Novak was saying this goes all the way to the top. Is Fizgerald going to subpoena the President? One could only hope...

I've got this all figured out. Please follow closely.

Viveca Novak is Robert Novak's daughter, whom he abandoned at birth. She traveled the globe with her mother as a child. One day she noticed a photo of a strange man in her mother's wallet, and asked,
"Who is that man with the thick eyebrows?" Her mother scolded her and made her promise never to ask the question again.

Many years passed. One day Viveca had the T.V. on, and saw the same man whose photo she had seen in her mother's wallet. He looked different now...heavier, grayer, and with an insincere smile that hadn't shown up in the original photo. But those eyebrows! Exactly the same. She figured it out. This was the long-lost father she never knew.

So Viveca bided her time until the opportunity presented itself to pay him back for abandoning her at birth. She got a job as a reporter. Made contacts in government. And now she has Robert Novak where she always wanted him...about to be crucified on the cross of White House vengeance.

What goes around, comes around.

You mean, the GOP doesn't have a different set of laws than the rest of America? They can't do anything they want? WOW!!!

I see Rove is back on the "hot" seat. Would it be sad if I had my finger crossed in hopes that something bad happens to all who would be affiliated with this administration. "Bad" would be going to jail to meet Ba Ba. You have to be explanatory because you could wind up on a air plain headed for Europe where the butt whippings last for months at a time all in the name of keeping America safe from those bad terrorist. In reality, there is no amount of spin that can convince me Karl Rove is innocent of the crimes he has been accused of. We, as a nation, will one day stop fooling ourselves for the sake of who is winning the talking points game. The nation, ours, is in need of a truth era, letting the chips fall where they might, so we can "clean house." The time has come to get real; our nation is in crisis, in war and in false economic recovery designed to fool the brightest in our country. I have scene Karl Rove dodge bullets directed at his dealings before; I just hope he's not due for anymore dodging.

Off topic, but I feel a need for humor:

"During an interview yesterday, President Bush said 'You can call me anything you want, but don't call me a racist.' Brian Williams responded: 'Whatever you want, Dumbass.'" --Conan O'Brien

"In a recent interview, President Bush said, this is a quote, 'I know a lot of people who are glad that we're in Iraq.' When asked who, the president said the leaders of North Korea and Iran." --Conan O'Brien

"President Bush's approval ratings on the way up. They've gone up 5 points this week. You know what you call that? A Christmas miracle. He's now up to 42% favorable. President Bush said his goal was to get it up to 49% --- like it was on Election Day." --Jay Leno

"The price of heating has gone up so much that people are now asking Santa for coal in their stockings." --Jay Leno

So Rove back on the grill again I see!!!!

Time for more fish to fry, and this time fry permanently and the original leakers be tried in court....

I have reviewed Fitzgerald's press conference language and the indictment against Libbey.

I finally realized that Fitzgerald made a plea to Americans who are in position to do so to:

Why do I say that?

Fitzgerald, having been compromised by the fact that a single American prosecutor is facing POWER, power that can destroy any nation on the face of the earth, POWER that can label any American citizen as an "enemy combatant" and therefore place them in a prison cell somewhere on earth, and do painful, hurtful things to them (a la Abu Ghraib) but "not torture", and ... well ... Fitz ... dig this ... WE GOT YOUR BACK!!!

Now I know why Fitz is NOT going to indict any American for leaking classified information at this time.

The reason is that no decent American, which excludes Rove and Libby, would attack Valerie Wilson. However, many decent Americans would in fact leak "classified documents" of this administration.

Nothing, including death, is gonna separate the citizens of the United States from the Bill of Rights ... we got thru that "election" a long, long, long time ago. Move forward and we will cover you Fitz.

Why? Because this admin wants to hide the truth, the reality, the American experience.

And Fitzgerald sees the wrong in that. So does Senator Spector. So do blue-blooded Americans everywhere. The reds, a.k.a. the red states, in contrast, do not ... but who gives a flying DeLay about that.

Come on AMERICANS ... LEAK or EXPOSE the stuff this admin is made of. Wrongful and despotic secrecy ... a.k.a. cover ups.

Its time for this whole thing to leak like a freakin siev!!!!!!

Its time to end the fourth "reich" and tear apart every limb.....

It's times like these I wish I was American so I can feel Mr. Rove squirm just that much more.

Rove is on the "Hot Seat" Because

eeeewww! Thanks for THAT image, JoJ!

This destructive waste belongs in jail or worse (Rove) has been roving too long he needs to be removed from his current status NOW. It's gotten way out of hand, they knew the "intelligence" was shit but they shoveled it our way to get their way, the invasion and subsequent occupation of IRAQ. One of if not the worst operation Amurika has ever been involved in this far, wait they'll be more...China anyone???