Impeachment by Radio
Sue Wilson explains why the elephant in the room is not the GOP...

Vengeful Trump attacks jury foreperson in Stone case, as lawless, vindictive 'descent into Constitutional madness' continues; Also: How to find ourselves out of this darkness...

Sunday 'The Baaas Have It' Toons
And they all fall in line in PDiddie's latest weekly toon collection...

WATCH CBS-LA's REPORT: 'How Much Confidence Should Voters Have in L.A.'s New Voting System?' 'None'

Featuring Brad and (some of) his concerns about L.A.'s new unverifiable $300M system...

Trump's SOTU energy lies; Dems focus on rebuilding U.S.; You just lived through the hottest Jan. on record; PLUS: Britain accelerates its ban on gasoline cars... 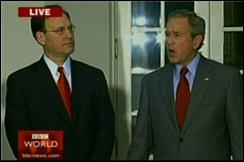 President Bush and Judge Alito appeared before reporters at the White House to kick off the Senate's Supreme Court confirmation hearings.

The President stumbled through a less-than-enthusiastic delivery of the standard GOP talking points in favor of Alito.

UPDATE: Bob Fertik has some interesting thoughts on this particular piece of video

« PREVIOUS STORY "With Democrats Like Harris Miller, Who Needs Diebold? (Or Republicans for that Matter!)"
» Go to The BRAD BLOG front page «
"Howard Dean on Alito, Iraq, and GOP Corruption" NEXT STORY »

Here's something else he's done:

Amazing! - I guess Paul and Ricky will have to leave now!

Okay, I just watched his attempt to communicate to the world again.....damn, he's not able to put 4 words together in one thought. So, is it the coke or booze or both? Less than enthusiastic is an understatement. Under the influence is what I'd call it. That's why he didn't take any questions and ran like hell, but I'm sure everyone figured that out.

Where ARE these 40%+ of people that keep saying they are FOR Bush in the polls??? Is there any independent poll run? Brad???

) You could do an unofficial poll. I just don't buy their numbers. What does everyone else think about the polls, do you believe them? Nobody is for him that I know (cept the ex...but then that's why I divorced his ass, because he's not very bright lol).

Alito is bad news and everyone knows it. I wish Sandra would rethink leaving, at least until the impeachment is over. Anyone asked her??

I think the battery in the reciever box on his back died.

Better get an eveready!

Oh, man, all the heinous criminality aside, just as a man, * is the most embarrassing excuse for a president I couldn't even have imagined. Alito standing next to that chimp, doing a Patton impersonation, or whatever that was, the lofty, imperious pose, was as appalling and embarrassing as *'s hungover statement, the more so because of the context in which he assumed it.

What about bringing some dignity to the office of president? My God....bush is stupid. Is anyone else sick and tired of being referred to as "the 'merican people" by this nitwit?

:crazy: Everytime I listen to him even for one second, which is pure torture, he makes me want to throw-up. The man can't form a sentence and has no intellect whatsoever. Alito looks like he is totally embarrassed standing next to Bush. Of course Altio will be confirmed, the democrats have no guts! They will believe every lie he tells as long as his eyes don't twitch and he never, never blinks!
Everytime I see Bush I notice his eyes are closer together. But I still believe, if there is a supreme being like the right says, he is playing with George like a cat plays with a mouse before he eats it.
I believe George was allowed to steal the second election as well as the first, so our supreme being
could have them all turn on each other and eat their young. I am a believer in what goes 'round comes 'round, and we are seeing the results, starting with Jackie boy, Delay and the list goes on.

Even Alito looks embarrassd by this idiot they call "president".

I have been neutral up to this point, but now I am turning against his nomination.

He is wrong in some of his cases, way wrong, and he has gone against the full en banc court being the only one out of 11 judges to dissent in a case that he was way wrong on.

In the final analysis, scAlito is becoming a more and more valid label.

Alito will be confirmed, the '06 election results have already been decided, and woe unto all mankind-- impeachment proceedings will never materialize.

I don't care how smart Alito is, his education, or what he said at the hearings. The only thing that matters is his record. Alito doesn't belong on my American Supreme court. His decisions weaken the majority of us. Makes me feel like I've been victimized. Bush...good God, go home and pop a beer.

Bush is such an embarrasment to this country and the world. I don't think I have ever seen or known anyone as stupid as this man is. He should be put in jail for high crimes, and then evaluated to find out what is wrong with him.

Court selected this fool for president and now this crook is nailing down his base on Supreme Court.Nothin can stop him once everone is in place.Better pray for a miricle!!!!!

I just love the part where he says the Supreme Court has no class.

Now thAt was an adlib. There was no way that came from an earpiece.
Assuming the other end has some intelligence, and class.