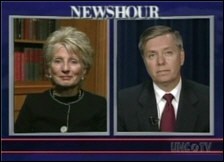 It is a rare occasion when words resembling actual wisdom grace the lips of the ultra-conservative South Carolina Senator. In this case, Senator Graham makes a strong argument in favor of the system of checks and balances required by The Constitution:


...the arguement that the Congress is unable to provide legal protections to American citizens in a time of war because the commander in chief believes that hurts his ability or her ability to make us safe would basically, over time, neuter the Congress and do away with the courts.

During our entire history, during a time of war, Congress has been involved in passing legislation [like] "The War Powers Act". Courts have reviewed military decisions... I don't want that to change because checks and balances at a time of war are more important than ever.

I'll believe it when he votes to impeach. Until then he is just another bible thumping knuckle dragging scumbag thug.

....probably just threatened by the prospect of a future Democrat having such Presidential power.

Sen Graham is a puppet. He has some very narrow and personal reason to appear as having integrity. This kind of performance reminds me of the schizoid behavior of Sen McCain. Perhaps the "Good Me / Bad Me" approach has been designed by Rove to further confuse all voters in advance of 2006 and 2008 elections. Keep the fog coming. RedCoats do not have multiple personalities, folks. They are enablers and abusers. If anything, they create victims with multiple personalities.

Just like all the rest of these thugs,Graham is just trying to save his butt,and the rest of those twofaced liars!!When they're caught redhanded,they try to play the innocence card!!They're all alike,not an honest one in the bunch!

He comes from a state where there is distrust of government, which is a very good quality.

He may be feeling pressure from the constituents who are seeing the rubber stamp congress as a grave danger to their country.