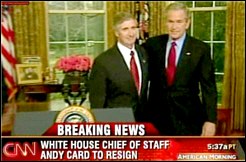 President Bush's Chief of Staff Andy Card will be replaced by Josh Bolton, the current Budget Director, who is also part of the President's "inner circle".

This clip begins with an introduction by CNN's American Morning. MSNBC's Imus provides some comic relief as the President begin's his Press Conference. Imus refuses to watch the entire press conference (calling it "insanity"). The video switches back to CNN for Andy Card's comments. In conclusion, NBC White House correspondent David Gregory provides some post-speech analysis.

Read more information about the White House shakeup from AP.

Most interesting part of the video was when a squirrel ran up the tree outside the window.

In your "CBS Reporter Rejects Myth of Unfair Iraq Coverage" thread, I asked:

"Hey, I wonder if it was Andy Card who decided to blame the media for not reporting all that good news from Iraq? He quit ... perhaps because that one backfired big time?" (link here, emphasis added).

Do I notice a pattern? It seems like each time bu$hit makes an absolute statement ("my staff is staying") the next thing we note is that the opposite happens?

Hmmm...I have no idea why, but something in the peripheral memory...for some reason my first thought was that it feels like there's something more about this that hasn't come out yet.

Or maybe I've just grown so used to there being something more beyond the spin that I find it hard to accept ANYTHING from this administration on face value.

Looney, if Cheney were there, one would have expect him to turn around and shoot it as a spy...

Anybody else wondering if he's stirred Fitz's interest?

I tried to watch the whole thing..I really did. But when Andy Card said that the president had kept his oath to preserve, protect, and defend our constitution, I started getting nauseous and had to turn it off.

France is in shambles

calipendence,
Hahaha, but naw. Only if there were about 70 of the suckers lying drugged on the lawn.

Guess who's next for a Medal of Freedom??

Of course Bush only wanted to APPEAR to re-arrange things.. if he was going for Impact he would have replaced Cheney, Eh? or at least Rummy! ?
Anyway, all this media wailing about bringing in "Fresh Blood" !
C'MON!!
It's entirely within keeping of this Den of Theives(and worse!) to
keep a tight circle.. everybody hAS JUST ENOUGH DIRT ON EVERYONE ELSE TO KEEP 'EM IN LINE!

""Hey, I wonder if it was Andy Card who decided to blame the media for not reporting all that good news from Iraq? He quit ... perhaps because that one backfired big time?""

ADMITTING THE COUP: "Anything less than putting snipers on the roofs of Washington D.C. would be an underreation by the liberals." --- Grover "Indian Killer" Norquist

Andy Card was exhausted, running out to get cheeseburgers and all. But he attacked Rove, and has had his hat handed to him as a result. "These will be very, very dark days for the White House," the consultant quoted Card as saying" last December as the Fitzgerald case heated up.

Well, not so much. But Card apparently tried to work behind the scenes to focus the blame on Rove, and got the door caught on his nose.

Fitzgerald is getting closer...

#8 Kestrel,
I reacted to that moment too! How he could stand there with a straight face & say "I watched as you kept your oath to uphold the Constitution"...WOW.
Guess he wasn't at the meeting where george called the Constitution a "goddamn piece of paper".

You know, I think I've finally figured out where all those lost billions might have gone: to buy enough cocaine to allow these guys to stand there & spew absolutely STUNNING black-is-white-down-is-up deception as if it's lily-white goddamn gospel.

Cannonfire is saying today that a plane Card was on had to make an emergency landing after he left the Bush ranch. Smoke pouring out the cockpit or something. Card's wife is a methodist minister. Hope that smallplane crash problem doesn't spread to republicans.