Can Biden Just Ignore the Debt Limit if Repubs Refuse to Raise It?: 'BradCast' 2/1/23

Guest: Kevin Drum of Jabberwocking; Also: Prepare yourself for the GOP's crash and burn Congressional 'investigations'...

From the debit limit to Biden/Trump docs to mass shootings to Ukraine and much more...

Million Dollar Sanction Underscores Trump's Seemingly Never-Ending Litigation Grift
Ernest A. Canning on why nothing less than a criminal prosecution will end it. (Maybe.)

Blogged by Brad on the road... (Yes, I'm on the road again for a few days, and struggling to keep up.) 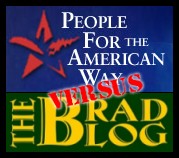 People For the American Way (PFAW) has yet to respond to my formal request or correct their unconscionable use of my name and website in spreading their misinformation about Election Reform and the Holt Bill (HR811) on their website. While I continue to consider them "the good guys," their deceitful behavior and lack of attention to this matter makes it harder to hold on to that assessment.

Please let them hear from you: (pfaw@pfaw.org)

If you've haven't yet, please see this open letter to PFAW from the day before last, requesting that they cease their outrageous mischaracterization of my personal position on Election Reform, as well as condemning the out-and-out dishonest misinformation on the Holt Election Reform bill that they are peddling there. All of that comes on top of their incredibly irresponsible advocacy in favor of the use of dangerous DRE touch-screen voting systems.

While the other major public advocacy groups in league with PFAW --- including MoveOn, Common Cause, VoteTrustUSA, and others --- are not actively advocating for the use of DREs, as PFAW is, none of them have disassociated from PFAW's indefensible position or spoken against their dishonest use of my name and website in support of their agenda.

For those who have expressed skepticism about PFAW's position, since they are usually considered "good guys" in these matters, here's a quick sampling of their statements in support of DRE voting, as published on their website in the official PFAW's analysis of the Holt bill [PDF] (from pages 2 & 3):

All demonstrably misleading or untrue. Non-tabulating touch-screen ballot marking devices, which print a paper ballot, can be used by the disabled without disenfranchising voters and creating unverifiable electronic ballots. And DRE technology is not "much more effective for minority language voters" --- quite the opposite is true, in fact. They have no science to back up their position. None. Zero. Zip. Nada.

Those statements, however, are at least out in the open. In their "Democracy Campaign FAQ", they have changed their tune, and used quite a bit of rhetorical sleight-of-hand to disguise their position. See my open letter to them for a few of the more egregious examples.

Cynthia Black of Action Point on KPHX 1480 (Air America/Nova M Phoenix) kindly asked me to record a couple of quick Public Service Announcements on these matters. They are now running on the station.

She suggested the PSAs be made available for others to use as well. Feel free to pass these on to your favorite local radio station, or use them as you see fit. Two spots, one on PFAW, and one on the need to ban DRE/touch-screen voting systems in Rush Holt's HR811 bill...

READER COMMENTS ON
"PFAW Silence Day 3: Still Misleading, Using My Name to Support Their Agenda, Refusing to Respond to Request for Correction, Cease and Desist"
(10 Responses so far...)

Anyone know what Norman Lears position is on all of this ?

...should have said 'personal opinion'

Ralph Neas was a Republican that worked for Dave Durenburger (R)tm Mn, now it appears that he has done a lot of good in the past, but they are still "privatization (of government) lite", or "make the government so small you can drown it in the bathtub" people.

I never much cared for Durenburger, maybe that's why we're having a problem with PFAW, Brad ?

The MO fits IMO, the Con infiltrator, was put in charge in 2000 just before Florida (to shut up at the proper moment), he has stood up, but has he ever won a contest that was really important (for us), the needling Brads getting downthread...just think about it for a second.

Yo, editorial-types,
Apparently this article had the "mark private" bug kick in? It's not appearing on the main page's list of articles.

What the hell is that about? Anybody else know anything about a bug in WordPress that sets stuff to PRIVATE somehow???

Thanks, Zap! Please feel free to email me if you notice that occurring again!

I've come to the conclusion, that we can not fix this problem anymore. (the EVM problem) It's the same old crap day after day, and I am sick of it. Nobody want's to really listen, and nobody sincerely cares, otherwise the EVM problem would be fixed long ago. I ain't saying quit, don't. But the pattern matching (at least in my opinion) is clear, that the two party dictatorial system we now have because of (EVM's) is out of control, there is no stopping it, the people can't do nothing. If the people try to bitch they'll get tossed in jail. Try to prove their shit can be cracked, get tossed in jail. Expose the secrets of the secret company get thrown in jail. Bitch at the politicians directly, get thrown in jail.

Alex Jones was right all along.
It's a police state now.

I wish for bad things to happen to these two party fakers, murderers, I hope the nastiest shit happens to them. I am sick of politicians and their fake ass crap.
They caused ALL this shit, not us. The war in Iraq ain't gonna stop, just like electronics in voting ain't gonna be removed. It just ain't. The people have LOST control of the government.

PFAW, and Move On. (I think I still have a moveon mail list) I never trusted those organizations. And all this money to elect people, it's crap, you don't need money, you honest people, who don't talk shit. No money needed to support them, that money feeds the MEDIA. and more bullshit.

Brad, actually yeah: it's known, It's apparently completely random, it's been observed repeatedly on a global scale... and it's a mystery.

The wordpress people say they are working on it.

PS: It does not surprise me that someone or some group (Maybe the new US government's Cyberwar) would exploit your wordpress since they don't like what your saying.
I mean it's not like it's a fsckin coincidence eh?

The good thing is that your so public, that any change will be questioned. So a stupid tactic like tweeking on a thread is gonna be a blip. But watchout for bigger things, domain name control, hosting service, etc.

If your small like me you won't be missed.

I checked back a ways on Ralph, He seems to be OK

although what I don't like, it appears PFAW stands for 'People for the AIPACian way'

If PFAW is what it should be, they must denounce AIPAC for the way it is now (neo-con controlled), and do it loudly

both are approved by just one example

I'm not anti-Israel, I'm just tired of these cocky old testament reading fuckers thinking they can come over here and impose their (recent, made up) beliefs on us, and change our policies so we use OUR military (read tax dollars) for their political gain in the middle east genocide ?
Old Yimmy Carter has it right IMO.

And they still receive big-time aid from us besides ?, that is a crime in itself...

(i) has really never been on the right side of this issue;
(ii) consistently implements programs that put fund raising and media attention above the cause or the interests of its own constituency;
(iii) regularly plays the role of stooge for whoever will help elevate its perceived stature.

C'mon folks, it's Washington DC. Do you really think that these national non-profits give a damn about their constituencies or the issues that they pretend to do something about? It doesn't matter whether they pretend to be on the "left" or the "right" side of an issue, its about perceived power and self preservation.

Is it any wonder that PFAW would misconstrue Brad's position on the election issue? Of course not, PFAW regularly strong-arms collaborators, whether they are willing or not, in order to generate the perception that they are leading a national force of activists.

It's all B.S. PFAW doesn't give a damn about election reform, it is just a great issue by which to garner national attention and increase their subscribership.

Brad, sorry, you won't get anywhere. They will continue to show you as a supporter of THEIR position because it is in their interest to do so. Truth, honesty and integrity be damned.

It's time to wake up to the realities of politics today. The non-profits on the left, that you all hold so near and dear, regularly take you for a fool. They are no better than the politicians that they critique, except they pretend to be working on a higher moral ground. The left won't succeed until it abandons these fake centers of perceived power and organizes true grassroots campaigns, with a relatively flat hierarchy, that truly represent the people's interest.

Sorry to burst people's bubble. But anyone with any experience knows what the comment is all about.