Can Biden Just Ignore the Debt Limit if Repubs Refuse to Raise It?: 'BradCast' 2/1/23

Guest: Kevin Drum of Jabberwocking; Also: Prepare yourself for the GOP's crash and burn Congressional 'investigations'...

From the debit limit to Biden/Trump docs to mass shootings to Ukraine and much more...

Million Dollar Sanction Underscores Trump's Seemingly Never-Ending Litigation Grift
Ernest A. Canning on why nothing less than a criminal prosecution will end it. (Maybe.)

Blogged by Brad (quickly) from the road... 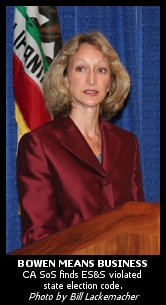 California Sec. of State Debra Bowen has announced a $15 million lawsuit against voting machine company ES&S for their use of uncertified AutoMARK voting systems in the state.

The BRAD BLOG initially reported on the likelihood of such a suit, in some detail, after Bowen's initial announcement of ES&S's violations of state law last August.

“ES&S ignored the law over and over and over again, and it got caught,” said Bowen in a press release just issued this evening. “California law is very clear on this issue. I am not going to stand on the sidelines and watch a voting system vendor come into this state, ignore the laws, and make millions of dollars from California’s taxpayers in the process.”

According to the release, ES&S seems to have simply lied about their use of the uncertified voting systems in the state of California. "The Secretary of State’s office held a public hearing on the matter on October 15, 2007. At that hearing, ES&S asserted the Secretary of State was notified about changes to the AutoMARK. However, ES&S provided no evidence before, during, or after the hearing to substantiate its claim."

Such deceptive practices are not uncommon for ES&S, as well as the other major e-voting machine companies. Diebold's touch-screen voting systems were decertified in the state in 2004, after it had been found that they had similarly deployed uncertified hardware and sofware, in violation of state law, in a number of counties in the state.

Secretary Bowen is suing ES&S for $9.72 million in penalties for selling 972 machines that contained hardware changes that were never submitted to, or reviewed by, the Secretary of State. Furthermore, she is seeking nearly $5 million to reimburse the five counties that bought the machines believing they were buying certified voting equipment.

“ES&S ignored the law over and over and over again, and it got caught,” said Bowen, the state’s top elections officer. “California law is very clear on this issue. I am not going to stand on the sidelines and watch a voting system vendor come into this state, ignore the laws, and make millions of dollars from California’s taxpayers in the process.”

The sales in question involve ES&S’s AutoMARK ballot-marking devices that 14 California counties use to comply with the federal Help America Vote Act (HAVA) requirement that voters with disabilities have a way to cast ballots privately and independently. Unlike direct recording electronic (DRE) devices, the AutoMARK prints a voted ballot that is counted by an optical scanner along with other paper ballots.

In July 2007, Secretary Bowen learned that ES&S had sold AutoMARK A200s – a version of the AutoMARK A100 that had been altered without authorization from the Secretary of State – to five counties in 2006. The counties collectively spent about $5 million for the equipment: Colusa bought 20 machines, Marin bought 130, Merced bought 104, San Francisco bought 558, and Solano bought 160.

Secretary Bowen issued her official findings and decision in the matter this morning. The Attorney General, who is representing the Secretary of State in the case, filed the complaint on the Secretary’s behalf in San Francisco Superior Court today. Both documents are available at http://www.sos.ca.gov/el...ess_automark_hearing.htm . Secretary Bowen is seeking the following penalties under California Elections Code sections 18564.5 and 19214.5:

We got a live one in California!!!!
I'm so glad I worked like crazy to get his lady into office!!!
We can call to give her some kudos here:

Way to go Brad and Debra Bowen!!! Your hard work and dedication to Freedom and Honesty are greatly appreciated! Thank You!

Great job Debra. Unfortunately, our SoS in New Mexico is an ES&S lackey.

However, I am meeting with the Deputy County Clerk for Bernalillo County on Wednesday to discuss the local (NM) situation with the ES&S maintenance contracts. All NM counties use ES&S to count our paper ballots. Which means I am going to be printing out a lot of BradBlog stories to show him what bad characters ES&S are. I'm looking at this as an opportunity to ban ES&S in New Mexico outright, so this particular story in CA couldn't be more timely.

FANTASTIC NEWS! So far, this REAL NEWS hasn't hit any national news shows I watch or listen to (which aren't many) not on the Top-of-The-Hour radio news or even NPR. Everybody tune into the Peter B. Collins show on Friday to hear Brad discuss this!

I believe OHIO SoS Brunner is supposed to have her test results finished by the first week of December. Let's hope we get similar action in swingstate Ohio!

Unfortunately, PBC is on T-Giving Holiday this Thur & Fri so it's a best of

Will have to wait until the following Friday. Which is, as you know, some 14 months away in "blog time"

But hopefully we'll remember to bring it up!

I worry about Ohio, though. There should have already been a lot more ass kicking over there from the new folks in power. Situation normal--all f***ed up.

WASHINGTON (AP) — Rachel Paulose, the embattled U.S. attorney for Minnesota, will be leaving the post to take a position at the Justice Department in Washington, according to a Bush administration official and congressional aide.

MINNEAPOLIS, Nov. 10 — If Attorney General Michael B. Mukasey wants to know what he is up against in restoring stability to the Justice Department, he is being urged by the department’s employees in Minnesota, as well as by prominent lawyers and law professors here, to consider an early visit to the United States Attorney’s Office in Minneapolis.

The 34-year-old lawyer who holds the job, Rachel K. Paulose, is routinely described by colleagues in Minneapolis and Washington as representative of much that went wrong at the department under Alberto R. Gonzales, the former attorney general. During his tenure, several United States attorneys were replaced with lawyers, like Ms. Paulose, who had relatively little experience as prosecutors or managers but were considered fiercely loyal to the Bush administration.

At 3:13 p.m., the attorneys in the Minnesota Office of the U.S. Attorney received the following email message:

Subject: A message to my colleagues
Dear Colleagues:
I have accepted a new position in Washington, D.C. I will be serving as Counselor to the Assistant Attorney General for the Office of Legal Policy. I am excited for a new opportunity to work on policy issues that are important to the mission of the Department.

I have been honored by the opportunity to serve the United States in this capacity and to work with you, our tremendous law enforcement partners,and the people of Minnesota. I expect my last day in this Office to be towards the end of this year.

It seems that the only way there could be a halfway honest election in the US is to ask for UN inspectors who have been specialising in doing this in countries where the likelihood of fraud was high. I would say that the US certainly fits into that category now. Could we start a campaign to demand UN inspectors for the 2008 presidential election?

They may understand this language since it is written in BASIC.


Unfortunately, PBC is on T-Giving Holiday this Thur & Fri so it's a best of

Will have to wait until the following Friday. Which is, as you know, some 14 months away in "blog time"

But hopefully we'll remember to bring it up!

WADDYAMEAN, BEST OF for the holiday????
What, you think you work in CONGRESS or something?
;-)
HOPEFULLY you'll remember?????
I'll just have to CALL IN to REMIND YOU!

I'll try to put together a Jennifer Brunner Ohio Election Machine Test Update.
Talk to you then!

Are you aware that this has NOTHING to do with electronic vote COUNTING devices????

The AutoMark counts NOTHING.

It is a device that helps the vision impaired MARK a ballot. Hence the name "AutoMARK"??!! What happens to that paper ballot is another matter altogether.

Yes, it involves an electronic vote counting machine MANUFACTURER, but none of their products that ever count a damned thing.

So if you think this is a step to eliminating electronic vote counting, you need to recalibrate your sights.

In fact, the decertification of AutoMark makes DRE's far MORE likely to be deployed.

Yeah, and don't forget about that CA. GOP electoral thing, or all this is for naught.

I'll look forward to that call!

I'm quite clear on what this lawsuit does. Most notably, it underscores how ES&S (and the other voting machine companies who you seem to consistently be apologizing for, as I recall), feel that they are above the law, can do any damned thing they want, distribute shitty technology and lie about it, and ought to be put out of business for their fraudulent and deceptive practices.

Other than that, of course, I'll assume you feel they should receive billions of dollars to be entrusted to count our votes accurately.