De Facto Summer Fund Drive
It started as Brad's birthday week plea, but we're continuing it in hopes of breaking even in these tough economic times for all. We want to continue The BRAD BLOG's free-for-everyone, no-paywall policy forever!
If you can help, please click here!...
Latest Featured Reports | Wednesday, August 10, 2022

Can Dems finally pass Schumer-Manchin bill to save the climate (and themselves)?; Also: Biden's 'rebound'; KY's death toll; Tuesday primaries; Callers ring in... 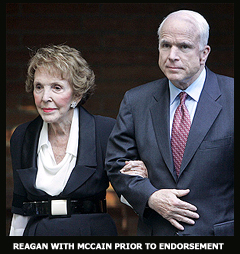 The Los Angeles Times published a story today --- on the front page above the fold --- about the adultery of a presidential candidate that, if it had been about the Democrat, would likely have changed the dynamics of the 2008 presidential campaign --- possibly even throwing the election to the other party.

Instead, the story is about John McCain, the Republican, and is therefore bound to be ignored by the rest of the mainstream press.

The only possible interest the story might generate in the corporate media --- and in conservative circles, where McCain is already not particularly well-liked --- stems from the fact that McCain's extramarital affair with his current wife, Cindy, permanently ended his friendship with Ronald Reagan and, especially, his wife, Nancy, around the same time Reagan was running for president 30 years ago.

The Times article opens with the strained moments around Nancy Reagan's tepid endorsement of McCain earlier this year:

Outside her Bel-Air home, Nancy Reagan stood arm in arm with John McCain and offered a significant --- but less than exuberant --- endorsement.

"Ronnie and I always waited until everything was decided, and then we endorsed," the Republican matriarch said in March. "Well, obviously this is the nominee of the party." They were the only words she would speak during the five-minute photo op.

In a written statement, she described McCain as "a good friend for over 30 years." But that friendship was strained in the late 1970s by McCain's decision to divorce his first wife, Carol, who was particularly close to the Reagans, and within weeks marry Cindy Hensley, the young heiress to a lucrative Arizona beer distributorship.

The Times reports that the Reagans sided completely with McCain's first wife in the divorce. They assisted her in finding a new home in Southern California and then helped her find a new career after Reagan became president.

In his 2002 memoir, Worth the Fighting For, McCain himself acknowledged the termination of the Reagan's friendship. "My divorce from Carol," he wrote, "whom the Reagans loved, caused a change in our relationship. Nancy ... was particularly upset with me and treated me on the few occasions we encountered each other after I came to Congress with a cool correctness that made her displeasure clear. I had, of course, deserved the change in our relationship."

The Times report today also casts doubt on McCain's oft-repeated story that he waited a decent interval after leaving Carol before he began his affair with Cindy Hensley:

In [his memoir], McCain wrote that he had separated from Carol before he began dating Hensley.

"I spent as much time with Cindy in Washington and Arizona as our jobs would allow," McCain wrote. "I was separated from Carol, but our divorce would not become final until February of 1980."

An examination of court documents tells a different story. McCain did not sue his wife for divorce until Feb. 19, 1980, and he wrote in his court petition that he and his wife had "cohabited" until Jan. 7 of that year --- or for the first nine months of his relationship with Cindy.

Although McCain suggested in his autobiography that months passed between his divorce and remarriage, the divorce was granted April 2, 1980, and he wed Hensley in a private ceremony five weeks later. McCain obtained an Arizona marriage license on March 6, 1980, while still legally married to his first wife.

While McCain was a prisoner of war in Vietnam, Carol kept their family --- their daughter and her two sons by a previous marriage whom McCain adopted --- together and became an active member of the POW movement.

On Christmas Eve 1969, however, Carol McCain suffered devastating injuries in a single car accident. The Times article says she "she broke both legs, an arm and her pelvis. She was operated on a dozen times, and in the treatment she lost about five inches in height."

When McCain returned from Vietnam, he told friends that Carol was no longer the woman he married, according to the Times. That would have been about 1973, just six years before he began his affair with Cindy Hensley.

One interesting side note is that McCain's divorce attorney was George E. "Bud" Day, a fellow POW who was a key player in the Swiftboating of McCain's former friend, John Kerry, in the 2004 campaign. Bud Day, who was closely associated with a group that has become synonymous with lying about an opponent's record, now heads up McCain's so-called Truth Squad.

Just imagine the firestorm we'd be enduring if Barack Obama were the subject of a story that had any of these elements: an extramarital affair, lying on the record about the timing of the affair and an estrangement from a political icon caused by the affair.

Obama --- or any Democrat --- would be hounded by the media and the rightwing noise machine to a degree that would very likely make his chances of winning in November somewhere between slim and none.

By contrast, it is as equally a dead certainty there will be nothing in the news about McCain's adultery, sex lies and estrangement from the Reagans after today --- not even when McCain campaigns in California for a constitutional amendment that supposedly protects marriage — not from adultery, the real threat to marriage — but from gay people seeking equal rights.

READER COMMENTS ON
"LAT: McCain's Affair with Cindy Ended His Friendship with the Reagans"
(5 Responses so far...)

Yeah, I agree. You won't see this in the mainstream media --- at least right now. But it will come up. I'm surprised that McCain's failure to vote on the Medicare bill hasn't been mentioned in the media (or even by the Dems). If it were known he didn't vote on this bill, he probably would lose the vote of millions of seniors (and a lot of doctors). Also not covered by the media is Phil Gramm's (McCain's main campaign adviser on economic issues and a former lobbyist for a Swiss bank at the center of the housing credit crisis) appearance before the editorial board of the New York Times, claiming he was speaking for McCain while at exactly the same time McCain was in Michigan denying that Gramm spoke for him!

Wilbur ~ The gop (Greedy Old Perverts) really expected to run jeb for dictator ... and finally turn America into the big plantation so rich Fuckers could entertain themselves by pitching pennies and watch the MIDDLE CLASS & POOR folks scramble for them. . . Yes, I trust Obama!

How ironic, since Saint Raygun was committing adultery with Nancy Davis, the "best BJ in Hollyvoot" while married to Jane Wyman. Aren't 'Pugs just happy when one of their own is at least caught with a woman, even if he is caught paying her to diaper his little "vitter"?

IT'S ABOUT TIME,THAT THE WORD IS OUT ON MCCAIN.. MCCAIN IS NO BETTER THAN JOHN EDWARDS...IF EDWARDS SHOULDN'T BE OUT OF POLITICS SO SHOULD MCCAIN.. BEING A POW IS NO EXCUSE FOR AN AFFAIR.. HANNITY SHOULD BE ASHAMED OF HISSELF.. MAKING THAT EXCUSE.

« PREVIOUS STORY "Pelosi Puts Impeachment Back on Table"
» Go to The BRAD BLOG front page «
"Did a New Poll Showing Congress with 9% Approval Spur Pelosi to Put Impeachment Back on the Table?" NEXT STORY »
See MSVL and support BRAD BLOG! Click here for signed premium version!