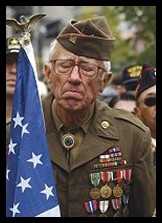 Despite last week's agreement by the Dept. of Veteran Affairs to follow federal law --- after months of pressure from vet groups, members of Congress, and the public --- and relent to allow voter registration drives on the department's federal facilities, The BRAD BLOG has learned that the department is continuing to block non-partisan groups access to our wounded warriors in order to sign up voters. With most voter registration deadlines for the general election just one month away, the continuing stonewall, in this case by the San Francisco VA, continues to outrage.

The non-partisan Veterans for Peace organization has now been forced to file an emergency motion with the court in order to gain access. They contacted us this morning with the following statement...

WASHINGTON – On September 12, 2008, the San Francisco VA prohibited Veterans for Peace (“VFP”) from registering voters, even though a recent “directive” instructs local officials to “facilitate” nonpartisan groups who wish to register voters. VFP is 501(c)(3) humanitarian and educational organization. VA officials told VFP that their visit would be delayed for at least 12 days by an investigation into each visitors “political activities” and a tuberculosis test, which requires two medical appointments. This violates a February 2008 court mandate.

In February 2008, the Federal Circuit in Washington held that VA cannot impose special requirements on visitors because of the content of their message. The Federal Circuit ruled that the VA cannot use its rule against “unauthorized demonstrations” to interfere with voter registration unless there is physical “disturbance” that also offends “decorum and decency.”

"Having registered only 414 veterans nationwide, the VA needs all the help it can get," notes the press release from VFP, which continues in full below...

Steve Preminger, a California labor organizer, has litigated for four years to ensure that all veterans living on VA property have access to voter registration. Judicial review of VA actions is split between the Federal Circuit in Washington and the federal district courts, enabling the VA to take inconsistent positions – telling each court that the other has jurisdiction. As a result, neither court has reviewed the VA’s use of “directives” instead of rulemaking processes that require the VA to consider public comments. “The VA has played legal ping-pong for four years,” said Preminger’s attorney, Scott Rafferty.

Rafferty explained today’s motion: “Even political parties can register voters on VA campuses, because the Federal Circuit unanimously rejected the VA’s position that is can ban ‘partisan activity’ that wasn’t a criminal ‘disturbance.’ By excluding the nonpartisan Veterans for Peace, the VA shows that the VA is interested in keeping veterans from voting, not preventing ‘partisan activity,’ which it has no right to do.

“The time-critical issue is giving every veteran a chance to register before the deadlines next month, as the VA promised to last May. Having registered only 414 veterans nationwide, the VA needs all the help it can get.

“Veterans’ experience in war gives them a powerful voice. The VA wants to stop them from using their right to speak out and to vote. The VA knows that many veterans oppose the Administration’s conduct of the War, the overextension of the military, and its inadequate support for returning warriors.”

Mr. Preminger attempted to register voters on a nonpartisan basis on April 15, 2004. The Democratic Party joined the suit to protect the rights of members and potential members who were confined to the nursing home and had no assistance in obtaining and completing voter registration forms.

« PREVIOUS STORY "Calls for Removal of Election Director After Arrest of Tucson, AZ, Election Integrity Advocate"
» Go to The BRAD BLOG front page «
"McCain Spokesman Spanked on Fox 'News' (of All Places) for Lies About Obama Tax Plan" NEXT STORY »

They are, of course, perfectly willing to let you vote - unless you happen to be a soldier or a sailor overseas, or a merchant seaman carrying the munitions of war. In that case they have made it pretty hard for you to vote at all - for there are some political candidates who think that they may have a chance of election, if only the total vote is small enough.

Seems to be the way of the Republican party...forever?

Do any readers know if this is happening in San Diego, which has a military hospital and a very large population of military and veterans? If so, please contact editor@eastcountymagazine.org with details.

these neo cons will stop at nothing it seems

did anyone else notice that @ the servicenationevent mcsame got "censored"?

if u go to cspan ,servicenationevent is like 5 pages back but @ 9:49 on the timer right after he says,congresses 5 week vacation.....for about 50 secs its all buzzzzzzzzzzz,,,,,,im guessing mcsame got lil off message

lotta peops read this board that r way more savy than i,pls help expose this crap

If you don't let the overall state of disgrace the criminals are leaving our country in overwhelm you, you start to see that each act of their tyranny only serves to undermine them, hidden from sight or not. But not actually allowing wounded veterans the chance to vote but allowing them legally on paper has to top the list of their outrageous hypocritical acts!
Oh yeah, and it gets mrs. war profiteer feinSTEIN off the hook.

[Ed Note: Feinstein. Fiengold is no missus. He's a mister, a male senator and not married to a war profiteer to my knowledge. --99]

I hope that this group keep pushing, but in the meantime I want them to go in a Repubs and sign up all the vets with absentee ballots. If the VA tries to block the mail, at least that is a Federal crime with other departments.

So when will America have enough of the Republican dirty tactics! This has been going on for quite sometime taking away a persons civic duty their right to vote. Yet we try to regulate and supervise voting in other countries like Africa, Iran, Iraq, Pakistan, Africa but cheat in our country.

About registering Veterans..Lets all get some of the necessary documents and just: GO VISIT THE VETERANS w/pens and FORMS and maybe even Postage Stamps for the Absentee Ballots to be mailed in.
That's what I am planning to do in Seattle, once I can get my hands on some form.
The Obama office has promised me some.
JUST DO IT !