Last week we reported that voters in one New York county were receiving absentee ballots with "Barack OSAMA" listed as the Democratic Presidential candidate running against John McCain. This week, the beat goes on in Virginia, but in this case, it's not a typo (as the officials in NY claimed about their "Osama" ballots.)

"In today's dangerous world, appeasement is not a foreign policy," declares the outside of the mailer from the Republican Party of Virginia, followed by photographs of the four leaders and the text "America must face the threat of terror head-on" on the inside.

On the back of the envelope used to send in the voter's absentee ballot request is a photo of what some Virginia voters, understandably, believe to be Obama's eyes, with the words "America must look evil in the eye and never flinch."

The complete mailer, with more of the pages and images than we show below, can be downloaded here as a PDF.

Decide for yourself, and note the additional graphic, now added as an update, comparing Osama to Obama (and calling for the latter to be waterboarded) as found on the Sacramento County, CA Republican Party's website...

Back of the return envelope, as paid for by the Republican Party of Virginia...

UPDATE: Some readers have written to suggest the eyes in the photo are not Barack Obama's but those of Osama bin Laden. You decide. We've changed the text above to reflect the possibility. We'd agree with commenter "bvac" who notes "I suspect that was intential on their part." Indeed, though the country's of the other leaders and dictators mentioned are named, neither Osama nor Obama are referred to directly in the mailer.

Along the same lines as the mailer above --- if, um, a bit less subtle --- comes the following graphic, as posted on the Sacramento County, CA Republican Party website, before they were forced to remove it, according to Sacramento Bee. (Hat-tip "Blue Texan" at firedoglake)...

A screengrab of the page, which included some other interesting graphics is right here.

Though they've removed the graphic above, the Sacramento GOP site still features a phony e-mail about Obama and flag pins on it's front page, according to RAW STORY.

FURTHER UPDATE: "Jazz From Hell" picks up on this report, and notes, in part: 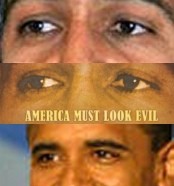 The back of the envelope features a pic (above the words "AMERICA MUST LOOK EVIL / IN THE EYE / AND NEVER FLINCH") that Brad says is Obama, which ties in with the reference to the "Democrats who want to control Washington" line inside the mailer, and would also be a natural deduction given the mailer's design color... brown, like Obama's skin such as in this photo.

However, that's not Obama. It's Osama bin Laden. Notice how the original photo has been tinted a la the infamous O.J. Simpson photo on the cover of Time.

I showed the image to a colleague of mine who also thought it was Obama at first, no doubt overtly influenced by the sepia tint. By his and Brad's--and surely the intended recipients'--erroneous IDs, a subconscious connection is made, which is exactly what is intended.

There they go again. Nothing here to report on, Brad. Rove's main tactic is and has always been to project on the "enemy" your candidate's own most egregious shortcomings, thereby de facto taking them "off the table" - to use an ill-fated choice of words, er, well, choice of inaction, whatever. When those guys accuse someone else of being a kleptomaniac their own pockets should be searched immediately. Fortunately, I think enough people have heard and seen enough of Barack and McCain to know wherein the evil lies. The bad guys will still have to steal this election to "win" it.

I think that image on the back is Osama bin laden, not Obama, but I suspect that was intentional on their part.

market economy? no? Fuck it then, ben and hank are about to crank down the noose. Goodbye bonds, goodbye money...Sure the election is important, but think! THINK! You know where my fucking links are!!!

Allen Raymond mentioned this dirty trick last night on Countdown about putting cops with loaded weapons at the polls in minority areas and... oh look

I think this IS bin laden. Obama has much prettier eyes with no evil spillage

go obama go, get those nasty evil liars out
of my whitehouse.

peace and love from san fransisco

Virginians have a lot of cleaning up to do this November. Vote the GOP lying laden party out of all positions possible. I trust and know and have been to Virginia; they are not so readily fooled by the likes of these xenophobic racists.

Flo, I just had this fantasy that Obama's primetime half hour on the 28th might be to warn people of these dirty tricks on election day. I know I'm a dreamer, but, well, hope springs eternal.

PUTIN AND CHAVEZ ARE A COUPLE OF MY FAVORITE PEOPLE!

Both of them walk the walk when it comes to improving the lives of their fellows. We don't have anything half that good in office right now.

The eyes are neither Obama's nor Osama's. Osama has bags under his eyes and much more pointed eyebrows. Obama has much heavier eyebrows and his eyes are not as round.

I think it's from this picture, flipped.

There are so many of these that I'd like to see some kind of website/clearinghouse of them all. For example:

"It used to be easy to recognize patriotism."

Then there are the neighborhood flyers that get distributed anonymously:

The GOP.. the party of completely failed policies, but very effective practices.

Too bad those practices are rooted in lying and abuse instead of truth and honesty.

It will never cease to amaze me just how many people seem to refuse to be honest with themselves and make choices based on their own thinking. ... I have a co-worker that seems to be a "democrat" based on her views, opinions that are 100% counter to the right-wing in a LOT of cases. But she's voting for McInsane-Failin Palin because she "always have, always will". I just can't get my head around that. How you BLINDLY support a "party" even though their policies are counter to what you believe in is the right thing to do.

I have a friend – a rock-ribbed Republican who would not vote for a Democrat to win a bet, but who refuses to vote for McCain. Why? “Because he’s a lousy pilot.” (My friend was a career Navy Pilot, who flew everything the Navy had to offer.) “The only thing he has going for him is five years as a POW, as he reminds us every five minutes. He’d never have been a POW if he hadn’t been a lousy pilot. And if, after all the training he got, he couldn’t even fly an aircraft, how can I expect him to be able to manage the Nation? Look. He’s smart enough to have been in the top ten at the Academy instead of the bottom five. He was too interested in partying to study, and he should never have been accepted for flight training. He obviously paid little attention to that, either; he has always done just enough to get by – and in Wartime, that’s not enough, nor is it enough to run the most important country in the world!”
“So who are you going to vote for?”
“Probably nobody. I can’t vote for Nader, and Barr isn’t all that great. I WISH the party had nominated Paul – I could support him in a heartbeat!”
Interesting. He didn’t even mention McC’s somewhat checkered career or doubtful associates; he opposes him strictly on the grounds of ability – possibly something we all should do.

The GOP has no shame. They can't win on the issues or their horribly dismal record so they once again they pull out their Rovian "Swift Boat" playbook and send out ridiculous fear-mongering mailings accussing Obama of being a terrorist. How low and deceitful can they go? Has the Republican party no shame, no decency? First, Palin and now this. The world is ashamed of us. McCain, it's time to put your country first and start telling the truth.

BTW: McCain's big lies on the debate won't fool anyone but a moron, bigot, racist, or blind party follower. McCain is a hypocrite of the worst sort --- like Bush he invokes patriotism as if he alone possesses it and anyone who opposes his 18th century ideas is a traitor. I'm still mad at the way he lied last night.