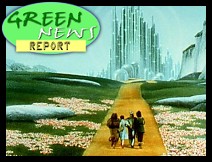 IN TODAY'S AUDIO REPORT: Fires and bats and bears --- OH MY!; Congress to offer 'Cash For Clunkers'; Some Democrats side with Republicans in stalling climate legislation; PLUS: A new lightbulb that lasts for 25 years?!? .... All that and more in today's Green News Report!

IN 'GREEN NEWS EXTRA' (links below): Cotton vs. Corn for American farmers; U.S. exports giant industrial pig farms to Eastern Europe, but not environmental protections; Ethanol gets a boost from Obama; Big Shipping has bigger emissions...See below for more!

Info/links on stuff we talked about on today's episode, plus MORE green news, all follows below...

« PREVIOUS STORY "An Audio Remembrance of John Gideon..."
» Go to The BRAD BLOG front page «
"Lindsey Graham: 'If we're going to let the bloggers run the country, [its] best days are behind us'" NEXT STORY »

Alright well you got me wanting to do a test.
My test is here. (Yeah I had to muck with the padding a bit. from 15px on the top to 45px so it doesn't crash with my node dates)

I groked some helpful info from here
http://www.1pixelout.net...player-wordpress-plugin/

And analyzing the code obviously I found this...
https://bradblog.com/audio/greennews/

Replace the mp3 file path and URL story page for each link from here. (Given you want to do archived history)

I have an idea to completely improve this for us, so we don't have to UPDATE it on our end, if I could get in touch with Brad. If the object is to get the Green News Report out at as many sites as possible embeded...

Really all Brad and Desi have to do, is copy their "CURRENT" report to a file in the same directory called, "CURRENT.MP3" Then when they update their report, they simply overwrite the CURRENT.MP3 . As far as the link goes, all his page=xxxx thing's (?p=7121 for example could be changed in the embeded code to point to http://greennews.bradblog.com/ then the links aren't ever hosed.

If you want to try to pass this idea off to Brad fine, otherwise I will try to get in touch later. You could simply cut and paste this info to him, he knows how to fix this--I guarantee it.

If I could get them to do it this way I could easily slap it into a block.

(I won't comment about the open directories) I'll only say, that I have an indexer script if you need one though...

Whoops Whoops also the TITLE should be changed to

If they want to track a specific date down, obviously they can hit the website links. But this way it would act like a CURRENT 6 minute radio station eh?

With LOVE from Phil

Thanks for the feedback on the new embed code, Phil. Yeah, I realize that an option for folks who wish to keep the always-most current GNR up and running would be helpful.

The idea of the initial code change, is to allow for specific embed of a specific episode (not unlike embedding a specific YouTube video). But others have mentioned the usefulness of a "current"-named MP3, and the changes you mention to allow it would not be all that difficult, so let me ponder how I might be able to adjust some of the code to allow for that option as well as the current code that allows embed of the specific date's GNR.

Your feedback is much appreciated!

BTW, Phil, I made a small tweak to the code as based on your use of it over at your site (largely to help keep font sizes in order). Please let me know if the updated code helps! Thanks!

Cap and trade is flawed. The green energy credits can be traded for coal and nasty energy producers.

Weatherization would do the most for saving energy..only problem ..no giant corporations would make a fortune off of it.

Transmission lines all across America controlled by the federal govt. not state.FERC having the ability for siting transmission lines. They are mainly for wind energy ...which is the most unreliable dollar for dollar worst form of energy in existance.

US govt. sued FERC over the building of a wind farm in ME because there was no room on the New England grid. It was built anyway...not producing but using energy now. Waiting for those free to the corporation transmission lines. They will make T Boone Pickens and Larry Summers multi billionaires. Enron was into wind power. Same criminals making policy today.

The Conn. Attorney General was investigating Iso New England for 86 million over billing of rate payers for stand by power not delivered. The two wind farms built by First Wind, Larry Summers' baby were found to be not online by the public. I'll bet Cohocton in NY is responsible for the over billing. There is so much political pressure to go along with this gigantic scam the post on the Conn. AG website has been taken down.

Remember how much power Enron had? Same goes for wind energy today. The truth is coming out slowly and the public does not want gigantic land based wind farms in their neighborhoods and communities.

Go to windaction.org, windwatch.org and cohoctonwindwatch for the rest of the story ...as Paul Harvey used to say. The most damning evidence is the anti trust lawsuit against First Wind and all in the cohoctonwindwatch archives.

Environmentalists are paid to say the right stuff by wind energy corporations. Then they all use the propaganda.

« PREVIOUS STORY "An Audio Remembrance of John Gideon..."
» Go to The BRAD BLOG front page «
"Lindsey Graham: 'If we're going to let the bloggers run the country, [its] best days are behind us'" NEXT STORY »
See MSVL and support BRAD BLOG! Click here for signed premium version!