<> Please help keep The BRAD BLOG independent! <>
All of our work, including The BRAD BLOG, The BradCast and Green News
Report, is made possible only by contributions from readers and listeners!
Latest Featured Reports | Sunday, December 4, 2022

Sunday 'Abandon All Hope' Toons
Give it up for PDiddie's latest collection of the week's best political toons...

We're Back! But Election and Accountability Season Never Left: 'BradCast' 11/28/22

Turkey Toons
Gobble gobble! Our thanks to the one and only Pdiddie for a special holiday collection of toons to help you burn off a few calories!...

Sunday 'Ready or Not' Toons
PDiddie's latest collection of the past week's most gut-busting political toons... 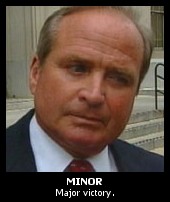 The federal bribery convictions of Paul Minor, an influential Democratic donor and attorney from Mississippi, and several others have been overturned by the Fifth Circuit of Appeals. Critics of the Bush Administration's Dept. of Justice have long charged that Minor's prosecution, along with those of many other powerful Democrats, such as former Alabama Gov. Don Siegelman, were politically motivated and directly manipulated by Bush political operative Karl Rove.

Earlier this year, Velvet Revolution's RestoreJusticeAtJustice.com campaign called on the Obama Administration's Dept. of Justice to review all such prosecutions by their predecessors, and to vacate any that are found to have been politically motivated. [Disclosure: The BRAD BLOG is a co-founder of VR]

The Jackson Free Press has the details on the court's finding overturning the "bribery" counts of Minor and a number of former judges found guilty in the same trial, after improper instructions were found to have been given to the jury by trial Judge Henry Wingate who also sat on Minor's motion to be released during the appeal, even as his wife was dying from terminal cancer...

The Fifth Circuit Court of Appeals has partially overturned the convictions of Mississippi attorney Paul Minor and former judges John Whitfield and Walter "Wes" Teel. A federal jury convicted Minor, Teel and Whitfield in 2007 for federal bribery and honest services fraud, but they appealed, arguing that prosecutors changed jury instructions to muddy the definition of an exchange of services for corruption, among other arguments.

Attorneys representing the three argue that Judge Henry Wingate agreed to loosen the jury instructions so that jurors could decide to convict, even if there was no clear exchange of services, or quid pro quo, between the judges or Minor. All three had successfully fought back allegations of corruption in an earlier trial in which the jury instructions were more clearly defined.

Today the appeals court tossed the federal bribery charges connected to the 2007 trial, leaving intact only the charges of honest services fraud.

Minor's trial and conviction has been investigated over the years by reporters such as Robert F. Kennedy Jr. and Brendan DeMelle, Legal Schnauzer's Roger Shuler and RAW STORY's Larisa Alexandrovna. Among other troubling aspects of the case, the Bush DoJ's has opposed the release of Minor on furlough for the purpose of visiting his wife in the hospital who was dying of cancer. She passed in April, and Minor was allowed to visit only after she'd become largely too ill to recognize him. Such unusually aggressive tactics by the DoJ were highlighted by such critics as more evidence that the vendetta against the power Democratic attorney was a political one.

Alexandrovna has more information on the overturned conviction at RAW STORY where she highlights a comment from Columbia law professor Scott Horton:

This outcome also raises serious questions about the conduct of the trial judge. He failed even to rule on motions for release pending appeal. And it now appears that the convictions had no merit. The result is that these three defendants were forced to serve jail time on meritless convictions, all thanks to Judge Henry Wingate, who sat on their motions for release pending appeal. His conduct handling these cases deserves some very close scrutiny, because it suggests a lack of judicious temperament at nearly every stage.

Happy Hanukkah to all readers of The BRAD BLOG and those who are celebrating the first night of Hanukkah tonight. We've been advised that Hanukkah is a "Minor Holiday", and --- today at least --- that now appears to be true!

Please sign on to VR's RestoreJusticeAtJustice.com campaign to join the call for an investigation by the Obama DoJ of Bush-era political prosecutions.

For much more on the evidence of political prosecutions of Minor, Siegelman and many others by the Bush Administration, please see these important investigative articles by Alexandrovna and RAW STORY's investigative team:

Updates to the PRM series

This is good news for Paul Minor. Unfortunately, the road ahead for Siegleman may be more difficult.

The decision may be good for Paul Minor, but it is bad for the rest of us. Weak laws make it almost impossible to prosecute politicians and judges for bribery. While state and USA laws fail to protect the public from corruption, they were made weak by the very people who would be prosecuted. Lawmakers, lawyers, judges, and politicians are not held to a higher standard of behavior as their ethical codes proclaim, they are held to a lesser standard. That lesser standard is that they have made corruption laws so weak, they get a free pass. Not only that, but they are given immunity. Go figure.

And what about whistleblower protection for those who risk everything to expose corruption?

Corruption will continue to flourish unless the public is protected by stronger, effective, and efficent laws and by effective protection for whistleblowers.