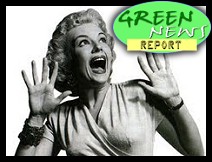 IN TODAY'S VERY SCARY RADIO REPORT: Superbugs are on the rise! And Monsanto is helping!; Extreme drought and climate change affecting power plants in the US!; PLUS: It's 'Dirty Air Week' in the U.S. House, the scariest place of all!!! ... All that and more in today's Green News Report!


But before taking on his politically advantageous anti-green jobs crusade, Issa sought government funds from the Department of Energy for an advanced battery manufacturing plant, saying it would help create green collar jobs.

Obama's envoy to climate talks in South Africa in December says bad things are in the future of the Kyoto Protocol.

Evidently the US is taking the position that green house gas emission standards should be allowed to expire in 2012.

If allegations that the Solyndra may have mislead the Obama Administration executives are proven in a court of law --- as all accurate and objective timelines of events seem to indicate so far --- then they should be prosecuted.

If all of the investigations turn up no evidence of wrongdoing, you'll be back and just as anxious to report that, right, Green Police??