What Evil Lurks in the Heart of SCOTUS? The Shadow Docket!: 'BradCast' 9/7/21

Everything You Wanted to Know About Socialism
But Were Afraid to Ask:
'BradCast' 9/1/21

War Is Not Healthy For Children and Other Living Things: 'BradCast' 8/31/21 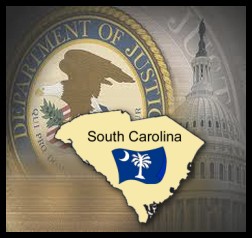 No time to detail this one for the moment, as I'm preparing to guest host the nationally-syndicated Mike Malloy Show tonight, so I'll just link to TPM's breaking coverage for the moment. I'll almost certainly have more to say on this on the show tonight, but for now, it looks like we've got still more good news this Christmas!

The Dept. of Justice has denied preclearance [PDF] of the South Carolina GOP's new polling place Photo ID restriction law, finding it was likely to disenfranchise voters, particularly minority voters, as "the state’s own statistics demonstrated that the photo identification requirement would have a much greater impact on non-white residents, DOJ said in a letter to the state on Friday," according to TPM.

The racial disparity seen by the DoJ is similar to the hardships, from such laws, to students and elderly voters (you know, the ones who tend to vote for Democrats, which is why the GOP is instituting these voter suppression laws in the first place.)

The GOP has long used the lie about an an epidemic of "voter fraud" by voter impersonation at the polling place, though they have failed to document virtually any instances of it. Nonetheless, they've been using such false claims to institute these types of laws around the country after Republicans took over a number of state legislatures in 2010. States that are covered by Section 5 of the Voting Rights Act of 1965 must receive preclearance for such laws before they can be enacted, given the history of racism in the covered jurisdictions.

The BRAD BLOG's own crack legal analyst, Ernie Canning, detailed the concerns that the DoJ had about the disenfranchising affects of the law back in September, noting that they seemed to be signaling at the time that preclearance would be unlikely, given many serious flaws in the state law.

A final decision on DoJ preclearance is still pending in Texas where the agency has also indicated they are likely to reject the new Photo ID laws. Meanwhile, in states not covered by Section 5, such as Wisconsin, it's fallen to non-governmental organizations, such as the ACLU, to challenge the new laws in the court system, as they did earlier this month.

All of this follows on Indiana's first-in-the-nation Photo ID restriction law, approved by the U.S. Supreme Court in 2008. Ironically enough, yesterday in the Hoosier State, the Republican Secretary of State Charlie White, now facing seven criminal felony counts, including three of them for voter fraud, was ordered removed from his post by a circuit court judge who found he was not eligible to vote or be on the ballot at all in 2010. The judge has ordered White be replaced by the second-highest vote-getter, Democrat Vop Osili. Our coverage of that incredible "White Christmas" story is right here.

* * *
Please support The BRAD BLOG's fiercely independent, award-winning coverage of your electoral system, as available from no other media outlet in the nation, with a donation to help us keep going (Snail mail, more options here). If you like, we'll send you some great, award-winning election integrity documentary films in return! Details right here...
Tweet
Reader comments follow below ad...

Based on the DoJ finding for South Carolina, shouldn't the first order of business for the new Indiana Secretary of State be to invalidate Indiana's discriminatory photo ID requirement?

David Dayen's take on the likely appeal, which could go to the Supreme Court.

Because the Supreme Court upheld Indiana’s voter ID law in 2008, it would not surprise me to see them uphold South Carolina’s version. And that could be a means to invalidate Section 5, giving Southern states with a history of racial discrimination in voting the chance to do so again.