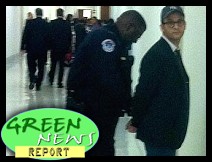 IN TODAY'S RADIO REPORT: 6 more weeks of winter? The Winter That Wasn't across the US; Extreme weather disasters leading to higher insurance rates; Wall St. Journal climate denier smackdown; Even Saudi Arabia believes in global warming(!); PLUS: House arrest for fracking filmmaker - House of Representatives, that is ... All that and more in today's Green News Report!

But ranting and raving won't make the damage disappear.

A Media Matters analysis shows that as a whole, news coverage of the Keystone XL pipeline between August 1 and December 31 favored pipeline proponents. Although the project would create few long-term employment opportunities, the pipeline was primarily portrayed as a jobs issue. Pro-pipeline voices were quoted more frequently than those opposed, and dubious industry estimates of job creation were uncritically repeated 5 times more often than they were questioned.

"Climate Denial" or "AGW Acceptance" are not political issues, try as some might to frame them as such. They are issues of Science and are utterly, therefore, matters of empirical fact. As such, the debate is long over, and AGW has been shown to lack sufficient evidence. Even the notion of "global temperature" has been shown, scientifically, to be ill-posed, meaningless (please, any of you with basic, undergraduate Math skills, check out http://www.uoguelph.ca/~...altemp/GlobTemp.JNET.pdf, and then please tell your less math-capable friends about what it means). There are no "party lines" here. This is NOT a political issue. Many are desperate to make it into one, but it's simply not. Not at all.

The article only shows that an average global temperature cannot be achieved. It does not dispute the fact that the "greenhouse effect" is trapping more heat in the atmosphere. Heat that would have been reflected back into space, had it not been for the added accumulation of greenhouse gases caused by human activities.

It is political when you have a huge percentage of knowledgeable scientists in agreement with this fact. And, mostly, Republicans denying it.

DieDaily, I am curious how you are able to state in one breath that these are "issues of Science and are utterly, therefore, matters of empirical fact" and then in the very next breath completely obliterate your own argument with the very-unscientific, un-empirical, fact-free assertion, "As such, the debate is long over, and AGW has been shown to lack sufficient evidence."

I hope you will expand your study to the scientific evidence. I respectfully recommend that you delve into the database of actual primary scientific literature at SkepticalScience.com. There you can compare your understanding of the math with the actual data, that has been gathered by actual scientists who are actual specialists in the disciplines of Earth system sciences, who have actually perfomed the field work.