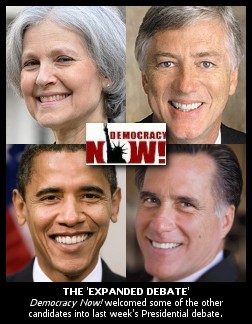 As she has done in the past, Amy Goodman of Democracy Now! offered a real-time alternative to the narrow constraints of a Presidential debate, which constricted the scope of political discourse to that which had been presented by the two major party candidates.

Where much of the post-debate analysis focused on the President's failure to forcefully respond to his opponent's deceptive claims or to point to his weaknesses, such as outsourcing in relation to his tenure at Bain Capital and his 47% remark, the scope of the two-party debate was also constricted by the questions posed by moderator Jim Lehrer. As Goodman observed, "some domestic issues went virtually unmentioned…including immigration policy, global warming, gun control, incarceration rates and poverty." One could add to that the disturbing failure to include such issues as Supreme Court appointments, Citizens United, Occupy Wall Street and issues of gender equality and women's health.

But, even within the confines of Lehrer's myopic questions, Stein and Johnson offered responses that suggest how including all Presidential candidates who have qualified to be on the ballot, into a single, extended debate, would serve to enhance the knowledge base of the U.S. electorate...

Stein began with a litany of reasons to support her assessment that the economic crisis that began during the Bush administration is "not getting better":

One out of two Americans are in poverty or living at low income and heading towards poverty. About 25 million people are either jobless or working in jobs that do not pay living wages. There are [approximately eight million] who have lost their homes…and we have an entire generation of students who are effectively indentured servants who are trapped in unforgiving loans and do not have the jobs to pay them back. We have an unemployment and underemployment rate of about 50% among young people.

Stein asserted that both Romney and Obama offer a rehash of the last twelve years. She proposed, instead, a "Green New Deal" which would be nationally funded but controlled at the local level. Local communities, she said, should determine "which kinds of jobs they need both in the green economy and meeting their social needs."

Anderson called for a "WPA type program investing in our nation’s infrastructure."

Stein stressed that the New Deal, "got us out of the Depression" and "created approximately four million jobs in as little as two months." Anderson said the WPA created eight million jobs. He predicted that a new WPA type program could put 20-25 million people to work.

Anderson also insists that "outrageous 'free trade' agreements," which provide the basis for outsourcing, must be replaced with fair trade.

Stein made an unconvincing case that there's no difference between the President and Romney on Medicare. The fact is very clear that Obama is opposed to Romney/Ryan's "voucher care" proposal.

She suggested that there is a need to "fix [Medicare] Part D [prescription drug plan] so that it is no longer a...giveaway to pharmaceutical companies."

Where the President suggested that all that was needed to insure Social Security solvency were some tweaks, both Stein and Anderson were specific. They said solvency would be insured by lifting the cap on income subject to Social Security tax deductions. Stein claimed the President intends to cut the cost of living adjustment for seniors.

Anderson called for a single-payer, "Medicare for All" healthcare system. Stein concurred, adding that "it's a sign how hijacked Washington is right now" that we adopted the Affordable Care Act (often known as "ObamaCare") instead of a single-payer system.

While the Affordable Care Act reflects an improvement on the prior unregulated, privatized insurance system that was not merely corrupt and dysfunction but responsible for the deaths of nearly 45,000 U.S. citizens each year simply because they can’t afford coverage, Obama’s exclusion of single-payer advocates during the health care debate and his insistence upon an insurance company-drafted half-measure, patterned upon "RomneyCare" in Massachusetts, significantly reduced the President’s ability to challenge Romney’s so-called "free-market" privatization scheme.

Anderson countered the President's statement that the central role of government is to keep its citizens safe, by claiming that citizens are concerned about being safe from our own government. He excoriated the encroachments on civil liberties, including government spying and the President targeting U.S. citizens for assassination. He lamented the absence of the rule of law and elite impunity, proclaiming there was " no sense of a one-tiered system of justice." He called for a repeal of the USA PATRIOT Act.

Stein concurred and raised concerns about the National Defense Authorization Act (NDAA) and the criminalization of the right to protest.

Stein said that we are "at the breaking point not only for people, but the planet, for the economy, and for our democracy." She claimed that both "Democrats and Republicans are making it worse and imposing austerity on the everyday people of this country while they continue to squander trillions on wars for oil, Wall Street bailouts and tax breaks for the wealthy." She added that her Green Party slate was "on the ballot for 85% of the voters" and offers the opportunity for "a real change in course."

Anderson ominously warned that this election is "about whether our nation will continue...toward totalitarianism." He said that both the Bush and Obama administrations "have shown utter contempt for the rule of law, due process, and the restrictions under the War Powers Clause of the United States Constitution."

Anderson contrasted the gross inequalities reflected by "a bad Ayn Rand novel or Mitt Romney speech," with "our most fundamental values" which entail working "together for equality of opportunity, equality under the law, liberty and justice --- economic justice, social justice, environmental justice for all."

* * *
Ernest A. Canning has been an active member of the California state bar since 1977. Mr. Canning has received both undergraduate and graduate degrees in political science as well as a juris doctor. He is also a Vietnam vet (4th Infantry, Central Highlands 1968). Follow him on Twitter: @Cann4ing.
* * *
Please support The BRAD BLOG's fiercely independent, award-winning coverage of your electoral system, as available from no other media outlet in the nation, with a donation to help us keep going (Snail mail, more options here). If you like, we'll send you some great, award-winning election integrity documentary films in return! Details right here...
Tweet
Reader comments follow below ad...

« PREVIOUS STORY "VIDEOS: My Appearance in RT's Special Report on Continuing E-Voting Concerns in the U.S."
» Go to The BRAD BLOG front page «
"GOP Firm Now Said to be Facing Criminal Probe in CO as Well, While Repub Sec. of State Ignores Allegations, Rants About Imaginary 'Voter Fraud'" NEXT STORY »

Rocky Anderson is the person I am voting for, and it was thrilling to see and hear Rocky and Jill Stein on what I call, the REAL debate. The next day the debate with Gary Johnson was something I wish all people who think alternative candidates are spoilers would watch. The only thing that keeps voters from hearing from all the candidate is the corporate controlled media and Democratic and Republican parties. Watch the videos at You Tube or at voteRocky.org. This is what democracy should look like.

While the US goes more in the direction of corporate fascism with different systems of justice according to one's economic status, nations in South America are becoming more fair and democratic. The US is its own worst enemy (but will scapegoat others), imploding due to institutionalized corruption and corrosion of its infrastructure.

If we had anything that even resembled a real democracy I would vote for Jill Stein any day.
BY FAR the best candidate, the rest don't even come close.
Sadly we live in a contrived, manipulated, duopoly where the Electoral College makes it WAY too easy to steal elections and keep 3rd party candidates from ever having any chance.

Thank you for a great informative post. Remember Rocky Anderson from the early days of the Bush Tyranny. Very very few people were speaking out. Scared I guess. Rocky Anderson made a speech re. bush and all, thought at the time that I would vote for that man for anything. He and Don Seigleman.

Thanks for the article. Greens and Libertarian-oriented citizens are also getting into many local public offices.

You can learn more about Rocky Anderson and the Justice Party at http://www.voterocky.org/.