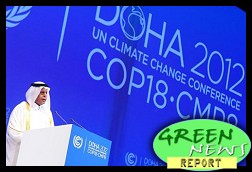 IN TODAY'S RADIO REPORT: Another round of UN climate talks begins in Doha, Qatar with more bad news: Permafrost is melting; PLUS: ALEC & Heartland Institute mobilize to kill clean energy ... All that and more in today's Green News Report!

IN 'GREEN NEWS EXTRA' (see links below): Study links autism to air pollution from traffic; 'Rising seas to swallow NYC if we don’t act'; Rare earths: The rush to production; Superstorm Sandy: Why NY ran out of gas; 7 reasons climate change is ‘even worse than we thought’; Florida's fresh water springs are dying; Saudi Arabia invests $109B in solar ... PLUS: Ocean Acidification: Marine animals are already dissolving in Southern Ocean ... and much, MUCH more! ...

« PREVIOUS STORY "Coulda Been Worse..."
» Go to The BRAD BLOG front page «
"Bruce Bartlett: 'My Life on the Republican Right And How I Saw it All Go Wrong'" NEXT STORY »

Not much silver lining in the realm of reality these daze:

More than 100 million people will die and global economic growth will be cut by 3.2 percent of gross domestic product (GDP) by 2030 if the world fails to tackle climate change, a report commissioned by 20 governments said on Wednesday.

(Reuters, bold added). When this starts going down a lot of people are going to want to hurt somebody in some places, so it could be that oil company people will be the new targets of the wrath of foreign nations like this:

A U.S.-based Egyptian-American said to be behind the anti-Islam film "Innocence of Muslims" and six other Egyptian Christians were sentenced to death in absentia by a court in Cairo Wednesday.

The film, which insulted the prophet Muhammad, sparked violent protests and attacks on U.S. embassies across the Middle East when it was released in September.

(NBC). If just making a film that is anti-Mohammad is sufficient to bring a death penalty, what will global warming caused deaths of hundreds of millions bring?

Correction: Correction: An earlier version of this article reported that the Heartland Institute received more than $7.3 million from Exxon Mobil between 1998 and 2010, and nearly $14.4 million between 1986 and 2010 from foundations affiliated with Charles G. Koch and David H. Koch. Those numbers represent donations to all the organizations that co-sponsored the institute’s climate conference in May 2012. The Heartland Institute itself received $736,500 from Exxon Mobil between 1998 and 2006, and $25,000 in 2011 from foundations affiliated with the Koch brothers, as well as additional donations from Koch-affiliated groups before 2000. This version has been updated.

Even more clarification from here:
http://wattsupwiththat.c...tland-claims/#more-75295

It's a sweet deal --- Heartland Institute gets to label itself as a "non-partisan" non-profit, and use the funding from companies whose business model is predicated on polluting for free, to advocate against anything that would require those companies to pay to pollute... And help those companies ensure that regular folks have no/few other choices for energy or transportation... And work to ensure the middle class continues to shoulder the costs of cleanup of toxic sites and the external health care costs from diseases caused by pollution. It's a wildly profitable business model.

Too bad about the long term impact on the climate and human civilization, tho. Oh well.

[Edited to add - these guys are far more blunt on the same point: http://exxonhatesyourchildren.com/]

« PREVIOUS STORY "Coulda Been Worse..."
» Go to The BRAD BLOG front page «
"Bruce Bartlett: 'My Life on the Republican Right And How I Saw it All Go Wrong'" NEXT STORY »
See MSVL and support BRAD BLOG! Click here for signed premium version!