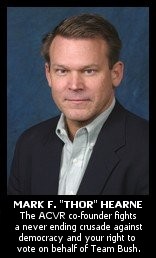 KEY BRAD BLOG ARTICLES IN THE SERIES SO FAR
(Most recent articles at bottom of list.) 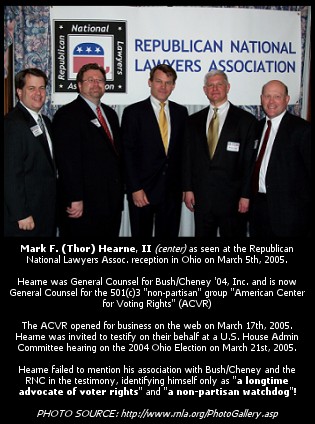 03/23/05: High-Level Republicans from the New 'Non-Partisan' 'American Center for Voting Rights' Explain Themselves... 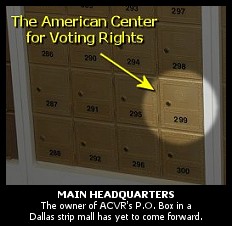 03/31/05: Revealing More About the Phony 'Voting Rights' Org and the Collusion of the Rightwing Echo Chamber of Friends Who Support It!
GOPUSA Runs CNS Story on GOP Front Group ACVR! The axis-of-evil-acronyms.

04/12/05: The ACVR Lands on the Baker/Carter Blue-Ribbon Election Reform Commission!
Anyone surprised?

08/8/05: ACVR Adds a 'Democrat' to Their Team! And he's a Fake too!
Brian Lunde shows up as an ACVR scamster. They claim he's a Democrat, but whaddaya know? He's also works with Karl Rove, and is a donor to Bush/Cheney '04 and to a PAC dedicated to "Maintaining a Republican Majority" --- like all good Democrats, of course!

08/15/05: Indicted GOP Moneyman Abramoff Tied To ACVR, the Phony GOP 'Voting Rights' Group!
The DNC Finally Fights Back at the Republican Run 'American Center for Voting Rights' Hoax!
PLUS: Proof that Republicans only pretend to hate Marxists and More on ACVR's Fake 'Democrat'!

08/18/05: The Mainstream Media Catches on to the ACVR Fraudsters!
The Pittsburgh Tribune-Review calls them and the Pennsylvania Republican Party out for the America and democracy-hating sheisters they are.

11/23/05: Ohio's U.S. Rep. Bob Ney Reportedly on Verge of Indictment
Corrupt Ohio Congressman, who gave ACVR their "big break" in Congress, may be headed to slammer!

10/11/06: U.S. Elections Assistance Commission Withheld Report Showing 'Voter Fraud' (as Opposed to ELECTION Fraud) Not a Problem!
Democracy Hater, GOP Operative, Thor Hearne of the Phony Anti-American Front Group 'American Center for Voting Rights' is Back Spreading Propoganda for the Republicans!
And the U.S. Commission on Civil Rights is Set to Help Them in a Hearing this Friday...

10/16/06: Missouri Supreme Court Declares State Photo ID Laws Unconsitutional (Again!)
Court Rulings (and Facts) Continue to Pile Up Against Those Who Hate Democracy (Like Thor Hearne and the ACVR), Who Want to Keep YOU From Being Able to Vote!
Decision Echoes Other Such Findings in Georgia and Arizona...

3/15/07: EXCLUSIVE: New Details on the Phony 'Voter Fraud' Angle in the U.S. Attorneys Purge Scandal...
An Insider's Report from a New Mexico Election Attorney on the Firing of David Iglesias and the Rove/DoJ/Republican Efforts to Create a 2004 'Voter Fraud' Scare in the State...
RELATED? - The GOP 'Voter Fraud' Front Group ACVR Goes Suddenly AWOL!

3/16/07: NY Times on the Phony 'Voter Fraud' Claims Behind U.S. Attorney Purge
More Evidence that the Bush Administration Used the Dept. of Justice for Little More Than a Blunt Political Instrument
Even as Democrats Continue to Rubber Stamp Wildly Inappropriate White House Appointments to Oversee the U.S. Elections Assistance Commission...

3/26/07: Evidence Suggests U.S. Attorney Firings May Have Been Part of White House Scheme to Help Game 2008 Election
Karl Rove Associate and GOP Operative Tim Griffin's Appointment in Arkansas --- and Others Like it --- Are Worth Noting as the Scandal Continues to Unravel...

3/30/07: EAC Finally Releases Previously Withheld, 9 Month Old Report on 'Voter ID' Concerns After Congressional Prodding
One of Several Reports 'Buried' by EAC, Shows Drop in Voter Participation in Wake of Poll Restrictions, Is Shamelessly Described as 'Draft'
Election Law Professor Warns: 'Chance for EAC to be an Honest Broker Above Politics Are Fading'... 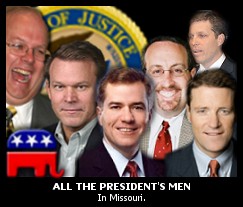 6/6/07: NPR Covers the American Center for Voting Rights (ACVR) 'Voter Fraud' Scam
'Liberal Blogger Brad Friedman' Interviewed in Report on Disappearance of GOP 'Vote Fraud' Fraudsters and Their White House Connections
Nobody from ACVR Agrees to Speak to Them on Record, But the St. Louis Post-Dispatch Says Thor Hearne Has Some Complaints About The BRAD BLOG...

6/7/07: Post-Dispatch: ACVR's Thor Hearn Blames The BRAD BLOG for His Demise
(Imagine What We Could Have Done if the GOP Gave US the Million Dollars That Thor Had?!)

6/13/07: GOP Vote Fraudster Thor Hearne's Attempt to Disappear Himself from Wikipedia Continues
PLUS: The GOP 'Voter Fraud' Legislation-Influencing Front Group Lied on Their Tax Disclosure Forms, Claiming They DID NOT Attempt to 'Influence Legislation'...

6/15/07: 'Hello,' He Lied: Thor Hearne Says 'No Conspiracy Afoot' Behind Effort to Scrub ACVR References from His Wikipedia Page
Tells Paper It Was Marketing Department at His Lawfirm, Lathrop & Gage, Who Dunnit
Beyond That, Has No Idea Why His 'Client' ACVR's Website Disappeared...
PLUS: More on Todd Graves & Tim Griffin...

8/26/07: Another Media Outlet Digs Into the Nefarious Thor Hearne and His 'American Center for Voting Rights'
Many Questions, Legal and Otherwise, Still Unanswered Concerning the Mysteriously-Funded 'Non-Partisan' GOP Front Group

3/10/08: 'Myth of Voter Fraud' Hearings to be Held This Week in Senate
Focus Likely to be on GOP Voter Fraud Front Group 'American Center for Voting Rights' as New Mexico's Fired US Attorney David Iglesias, Missouri's SoS Robin Carnahan and Others Are Set to Testify on the Republican-Run Voter Disenfranchisement Scheme...

3/13/08: Thor Hearne Crony Testifies on Photo ID Restrictions at U.S. Senate Hearing on the 'Myth of Voter Fraud'
Univ. of Missouri's Jeffrey Milyo Can't Recall Name of Thor's ACVR-Funded Group That Funded His 'Voter Fraud' Study
'An organization called the Center for Ethics Research, or Something Like That,' Says Academic When Asked Who Gave Him Grant Money...
-- Guest Blogged by Howard Beale of Fired Up! Missouri

5/12/08: GOP Vote-Suppressor-in-Chief Thor Hearne Deserves a Raise, Gets a Boost from the NYTimes, and Continues His Unapologetic Assault on Nuns, Vets, Students, Hurricane Victims, Married People, the Elderly, and Palsy Victims
You're a Great American, Thor Hearne...